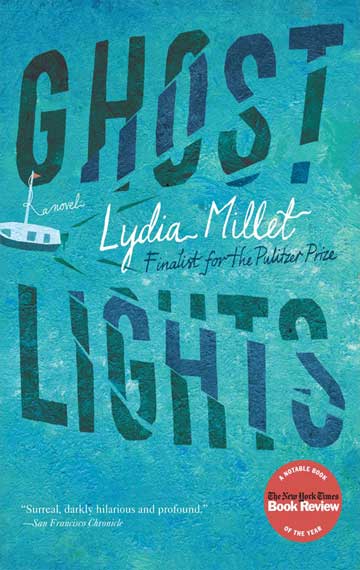 Ghost Lights is the second novel in a trilogy that began with How the Dead Dream. It tells of an IRS bureaucrat named Hal — a man baffled by his wife Susan’s obsession with her young employer, T., and haunted by the accident that paralyzed his daughter, Casey. In a moment of drunken heroism, Hal embarks on a quest to find T., who has vanished in a jungle. On his trip to Central America, he descends into strange and unpredictable terrain, including an unexpected affair with a beguiling German mother.

The walls were kittens and puppies. Like other pet facilities he had seen — even the Humane Society, where he had taken Casey when she was six to pick out a kitten — the kennel trafficked in a brand of cuteness he could not endorse. He had nothing against pets; in theory, the more pets the better, although he personally did not own one. Not in the sense of unchecked proliferation, feral cats mating all over the place, etc., but in the sense that cats were good, dogs were good. No argument there.But he did not see why this high regard for pets, his or anyone else’s, should be represented by photographs of puppies with word balloons emerging from their mouths — balloons that contained supposedly witty sayings that were, in fact, stupid. There was no call for dachshunds dressed up as the Blues Brothers.

Susan’s name had been on the list of emergency contacts for this particular dog. When its owner failed to pick it up after several weeks the kennel had finally called her. Instantly she felt guilty; she should have thought about the dog far sooner, she told Hal. She had forgotten the dog, forgotten all about it.

What was wrong with her? she asked him insistently.

Now here they were, come to pick up her missing boss’s dog — the dog of a man who had vanished many weeks ago into a tropical jungle — and the woman at the front desk was worried for the dog. Not for the absent owner, no. She was interested only in the dog’s situation.

Hal glanced over — surreptitiously, he hoped. She was a heavy, lank person with bleached hair showing black at the roots and a kind of jowly gray pallor that bespoke ill health. Neither dog kennels nor the Humane Society were typically staffed by so-called beautiful people, in his experience. They were staffed by committed pet lovers, and frankly these committed pet lovers put less than average value on appealing physically to their fellow men.

Or maybe they sought out the company of pets in the first place because they did not enjoy the company of said fellow men. It was understandable — a form of relaxation, perhaps. Even if he himself was not a committed pet lover per se, a committed a.k.a. professional pet lover, he could appreciate that. As to the lank half-dyed hair, greasy pallor, etc., they were probably caused by a philosophy. Hygiene and style were aimed at winning the favor of others, after all, and the committed pet lovers already had the respect, or at least the gratitude — which might even be preferable, in the eyes of a committed pet lover — of peers and strangers alike. They were monks and nuns, in a sense. Monks and nuns of the pets. •